VHeadline commentarist Carlos Herrera writes: the speeding up in the regularization of land titles and the application of the 1999 Land Law is now underway. The result in the opposition media has been almost hysterical. A good example of this hysteria is the editorial of Veneconomy published September 27.

For VHeadline readers, suffice it to say that Veneconomy is one of the constant mouthpieces of the corrupt Venezuelan oligarchy which successfully looted the country for more than 40 years and does not like it when the boot is in the other foot.

Veneconomy is a constant critic of the government as well as President Chavez -­ which is their right in terms of freedom of expression — however, when editorial upon editorial is written day after day, criticizing anything and everything the government does or says, with no let up, it is no surprise that Veneconomy was on the side of the coupsters of April 2002, the oil industry lock out and sabotage of 2002 to 2003 and has no regard for the weaker stratae of society.

In effect, Veneconomy is a mouthpiece for US imperialism and its heinous neoliberal values in Venezuela.

Poverty grew in Latin America … the rich got richer, and the poor, poorer. So much for the benefits of capitalism and imperialism for 400 million people out of the half a billion on this sub-continent, both of which were applied from the time of the arrival of Christopher Columbus in Hispanola in 1492.

The expropriation of the Empresas Polar silo complex is Barinas state by decree of Governor of Barinas State, Hugo de los Reyes Chavez was not a surprise.

Polar had been constantly dismantling silos and sending the components to Colombia for the sake of gaining more profits. Bearing in mind that this company was, and still is, the main privately-owned provider of staple food stuffs in Venezuela, it abused its power and social responsibilities to attempt to starve the Venezuelan poor into submission during the 2002 to 2003 strike … even though legend now has it that they cooperated with the government to provide “minimal supplies” in those dark days.

The Mendoza family (owners of Empresas Polar) should still be relieved that they did not have their businesses confiscated for supporting the coup d’etat and participating in the lockout … as would have been the case if Chavez had not been so benevolent.

It can be argued that this company was in violation of Articles 113 and 114 of the Constitution regarding monopolies and hoarding respectively.

Government policy based on Articles 299-304 of the 1999 Constitution makes it quite clear that farmers have a right to the land they sow and crop. Chavez said in a recent speech that the government respects private property but that such property, especially if it is under-utilized crop or grazing land, is obliged to have a social function, and idle factories will also be expropriated. There are 700 businesses of this type in the government’s sights.

Thus, in contrast to what Veneconomy maintains: “the right to private property includes the right to have assets that are not in use,” the law is once again clear that assets allied to food processing and industrial production can not be left idle or abandoned without there being a risk that these assets will be expropriated.

In flamboyant style Veneconomy uses the “blanket statement technique” to put the fear of God into its readers: “In Hugo Chavez’ revolutionary Venezuela there is no respect for private property, a person’s word or the law … and much less for the letter of the Constitution, which is not worth the paper it is written on.”

In the sections of the Constitution referred to above, Articles 299-304, food sovereignty is one of the main planks of government economic policy and will take years to achieve. Almost 70% of food consumed in Venezuela is still imported. And Empresas Polar is moving production facilities out of the country!

What Veneconomy does not, can not or is incapable of understanding is that Chavez is carrying out the mandate of the vast majority of people who voted for the 1999 Constitution and its content. If he does not do this, he would not only be derelict in his duty by not adhering to Constitutional edicts, but also by not applying the law of the land.

Far from there not being any “respect for the law” … or the letter of the Constitution … which according to Veneconomy is “not worth the paper it is written on,” … the law is now finally being applied and this process will accelerate.

The label being used to scare the middle classes is the “New Socialism of the 20th Century.”

If this concept means placing the food sovereignty of the Venezuelan people in the hands of the historically excluded majority in terms of crop production and use of fertile lands, and this can be achieved within the framework of the Constitution and the laws of the land, then so be it.

We do not want to be vulnerable any more to the coup mongering desires of big business and its profit oriented interests, exploiting the workforce for the minimum wage. Much of the land under private ownership is being audited to ensure that legal purchases and registrations of land were legally made all the way back to a decree of the Libertador in 1821 and a further law of 1848. If this chain of land titles can not be proven, ownership of the land will pass to the State.

The large landowners and their ancestors have only themselves to blame for this state of affairs … they always felt that they were a law unto to themselves. They routinely fenced-off great tracts of state land and claimed them as their own … often by force of arms and then generated false titles.

For the first time since 1821, a real effort is being made to regulate the land. The laws exist to do so.

The result has been 70% of the land owned by 3% of the population. Most of the land is not cultivated. Many owners live in Caracas, New York or Miami. Their ancestors stole this land and now it is gradually being returned, legally, back to the rightful owners, the Venezuelan farmers and their families.

Veneconomy also supports the crooks of the now-privatized telephone company, CANTV, which has systematically refused to obey the law and pay decent pensions to its ex-employees, leaving them plunged into deep poverty, some after a life time of work. The “acid and sword of the law,” to quote President Chavez, will be applied to CANTV if it does not pay up after a decision by the Supreme Tribunal backing the pensioners demands. However, Veneconomy states: ”some US$279 million that it [CANTV] does not owe its pensioners and their families.” BUT, the high court judges decided to the contrary … if CANTV does not pay, let’s hope that the State decides to expropriate its assets and place this strategic industry back under state control.

All within the framework of the law, of course. 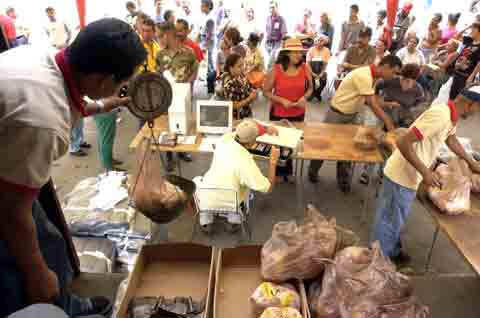 Readers must appreciate that in the “good old days” for which Veneconomy still yearns … albeit in vain … any major company could buy favorable sentences in the then Supreme Court, and even more easily in lower level courts.

All that has now changed and those who are losing their ill-gained privileges due to real justice being imposed by the newly constituted Supreme Tribunal are now squealing like a truckload of stuck pigs.

A slow and inexorable legal process is underway which will make for a more equitable society within the framework of what Chavez now calls the ‘New Socialism of the 20th Century.’ This concept is open to wide debate but, for me, in terms of the land and means of production, it is no different to the humanitarian and land sharing edicts of the Libertador, which were then usurped by the new creole oligarchy and the mantuano class, which replaced the Spanish imperialists, after the death of Simon Bolivar in 1830.

“¡Bolívar vive, la lucha sigue!” (Bolivar lives, the struggle goes on!) is the popular battlecry of the Venezuelan people against the oligarchy.